An honest presentation about perceptions and history of nuclear power, posted recently by Lenka Kollar at Nuclear Undone (first appearance I believe on EcoJustice.TV) Don Miley has worked at Idaho National Lab for over two decades.

There are some who will go to any lengths to avoid considering information presented by nuclear professionals. This is what they miss out on.

As salient now as it was back in early 2011. 2014 needs to be the year that Australians start putting on the pressure for a rational, inclusive discussion on where we’re going to get our clean energy from in the future to power business and industry and provide greater opportunites for the next generation.

I want to see Professor Brook’s ten-to-fifteen year timeframe curtailed. Let’s do it right, but let’s get a move on.

Adding more nukes increases the risk of an accident.

This is a great example of an effective little sentence message which conjures mental images of Chernobyl’s gaping roof or Fukushima Daiichi’s spectacular hydrogen explosion. It plays on ingrained radiophobia. And it’s not at all hurt by the fact that it’s true, at least statistically.

But if you think about it in context with other risks which civilisation is prepared to take, how legitimate is it? Put more cars on the road, get more accidents. Open more airlines routes, witness more crashes. Develop more coastline, suffer more storm damage. These examples are accepted as progress. The first example is all but ignored by western cultures, but it illustrates a dramatically bigger problem, since cars can interact unpredictably on the roads. One accident can conceivably trigger bigger destruction. 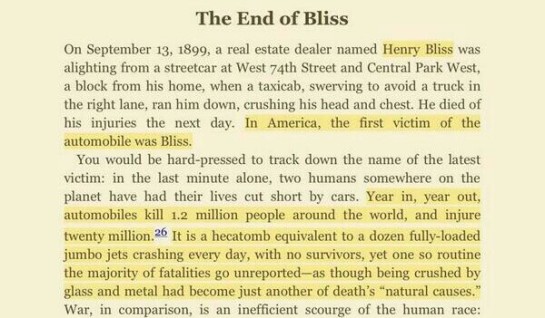 Nuclear plants, even each reactor at a given plant, will not affect others like traffic does. Look at exactly what we’re considering: the next reactor accident will most likely be isolated, contained within the sealed structure (at least initially), and the result of inadequate cooling. Yes, Russia still operates a few RBMKs, but the question pertains to building more nuclear power capacity, and that won’t include the RBMK reactor. New reactors have the benefit of sixty years of history and exhaustively studied accident conditions, and as with all high technology, expert understanding of nuclear power and reactor design expands and becomes more complete over time – old knowledge isn’t somehow replaced with different but comparably limited new knowledge. 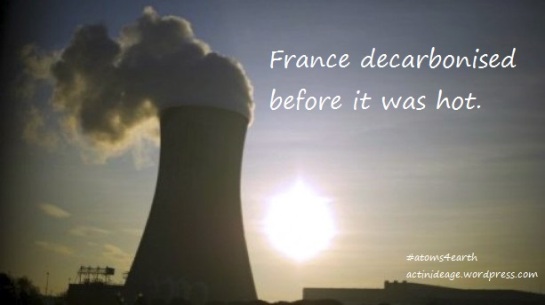 So let’s look at an actual example. In 1980 France began producing electrcity at new plants like Tricastin, then added the bulk of capacity over the following ten years. Acording to the logic we’re addressing, each extra reactor increased the risk of nuclear catastrophe. Some reactors have been retired, but France currently operates fifty-eight for commercial power, with the most recent being connected in 2002 at Civaux. For twelve years already, France has increased its chance of some sort of meltdown or loss-of-containment event – something that will release considerable radiological contamination – by fifty-eight times from 1980 levels, with the odds being nearly that high for much of the preceding period.

I would absolutely love to visit France, and I would undoubtedly fly there, despite its worst national air disaster having happened within the discussed timeframe. 228 people were lost.

Dare I say it, maybe there’ll never be another catastrophic accident with radionuclide release. Or if that’s hard to imagine, maybe there’ll be release, but the affected public will be prepared through education regarding the true risks and benefits of radiation, instead of being bombarded with scaremongering from emotional, knowledge-deficient anti-nuclear institutions. I’m far more certain, if history is any guide, that this is what would save lives.

If you’re here with me in Australia and aren’t really interested in nuclear energy, you won’t have heard of Vermont Yankee, a perfectly good power plant that is to be retired this year mainly due to political and environmentalist pressure.

“Big deal, that’s all the way over in the States.”

Sure. But it’s global warming, dig? As Rod Adams summarises:

Fuel supply constraints in New England were severe enough on cold days during Winter 2013-2014 to push gas prices to a peak of $125 per MMBTU.

Virtually every dual-fueled generator in the region switched to distillate fuel oil on extremely cold days because that premium liquid fuel only cost $22 per MMBTU.

There were days during the winter when 25% of New England’s electricity came from burning distillate; fully 4% of the kilowatt hours during the months of December, January, February and March came from oil, up from just 0.6% the prior year.

If Vermont Yankee had not been running, electricity generators on the New England grid would have needed to purchase an additional 100 million cubic feet of natural gas every day.

On the days when natural gas was too pricy, Vermont Yankee’s daily output would have been replaced by burning almost a million gallons of diesel fuel.

In either case, the generators that would replace Vermont Yankee’s output would daily produce an extra 325,000 kilograms of CO2.

I would love to see this grassroots effort to assume ownership of this plant and keep that carbon out of the air. Isn’t that the priority, in a world where the potential harm from climate change is approaching with increasing certainty, while conventional nuclear accidents are incredibly infrequent, reported on hysterically and yet result in little to no death and injury? 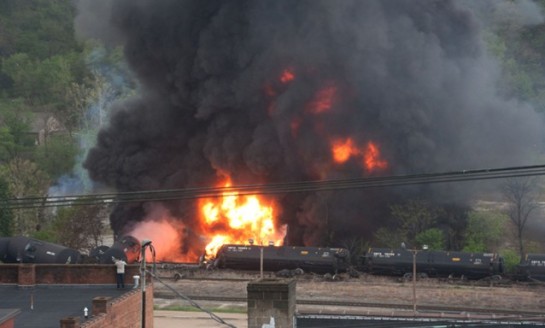 Japanese authorities are hoping to restart nuclear plants this year, beginning with units at Sendai, but efforts are all uphill against vocal opposition from environmental NGOs. Tokyo has focussed on fossil fuel and resumed nuclear capacity to meet future energy needs so opposing restart of nuclear will not somehow magically achieve coast-to-coast wind turbines and solar farms. All it will effectively achieve is greater carbon emissions from already entrenched, expanded fossil fuel imports that are crippling Japan’s terms of trade.

Environmentalists! What do you actually want? To save the world from the Caldicott-Gundersen-Jaczko-Kaku version of radiation Ragnarök? Or to save as much carbon from entering the atmosphere as possible from this moment forth? 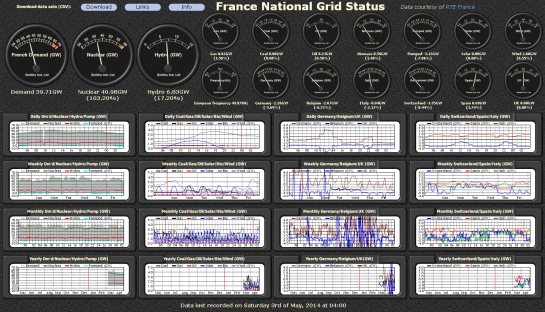 And here is Ontario:

They are doing what we all need to be doing: generating reliable electricity for their societies, industries and businesses with minimised carbon emissions. Anyone who cannot see this primary truth is, frankly, part of the problem. And yet the ideological anti-nuclear pressure is exerted in both cases, and while reasonable build-out of solar panels and wind turbines will surely help, too much of the cure ends up being toxic – especially when the illness was hypochondriacal to begin with.

Does it make you uncomfortable when I talk about nuclear like it’s just another energy source? Or when I unashamedly advocate for it, does it automatically bring to mind platitudes about leaking reactors, nuclear waste and Chernobyl mutations? Do you reckon that when advocates for medical evidence-based childhood immunisation talk about its necessity for worldwide public wellbeing and development, maybe anti-vaccination people* might be feeling something similar? 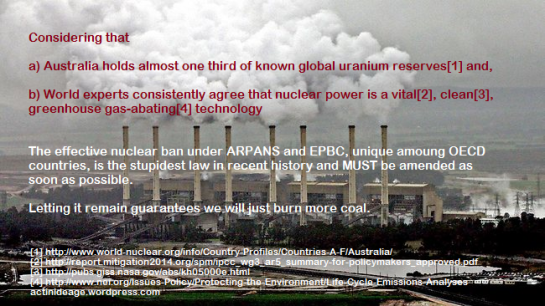 Not even New Zealand, famous for its nuclear-free stance, disallows by law the consideration of nuclear energy. Australia’s population has achieved an enviable standard of living and societal freedom, largely on the back of plentiful, inexpensive fossil fuel energy. The science is in, the technology has progressed: now is the time to start planning the replacement of our energy sources that have so well served us yet might bring calamity. Just ask Ziggy Switkowsky:

(*I don’t mean to specifically target those who choose against vaccination, but the point is they put themselves in an emotionally-informed position at odds with the established science. Some even label the medical professionals, who attempt to inform them of the true benefits versus risks, as being shills for big pharma. I could go on.)