This is an entirely fictional and hopelessly optimistic newpaper article from around the end of this decade, assuming certain spontaneous outbreaks of rationality and determination.

In what may be remembered as its most historic moment since Federation in 1901, the South Australian parliament yesterday voted almost unanimously to approve the final regulations pertaining to the proposed Inner Harbour IFR Project.

The recently minted Premier was actually grinning on the steps of parliament. “As you know, this modern, carbon-abating power plant was something I took to the last election as an answer to South Australia’s deteriorating, fossil-dominated electricity supply.

“We are a state of firsts, and Australia’s first 620 megawatts of nuclear waste-burning power will be built right here in Adelaide, with local contractors and local jobs.”

The resources minister was equally optimistic. “The partnerships we have with all of the new and planned reactor operators in Korea, South America, the US and China to supply high quality uranium will ensure sustainability of the industry as it steadily replaces coal mining as our dominant energy export.

“Accepting it back after use for recycling is just common sense.”

After shaking hands with both the Premier and the Opposition Leader, the director of the project coordinating body, South Australian Integral Fast Energy Sector Transition (SAIFEST), said, “Since the groundswell overturning of the federal prohibition on nuclear power, part of our tireless work has been the adaptation of the very best regulations and guidelines from the most successful foreign nuclear energy programs, always with an eye to what is most suitable for Australia’s rather unique circumstances.

“Yet even I hardly dared dream it could all happen this rapidly.”

The regulations also pertain to the expansion of mining, the nascent nuclear fuel enrichment facility and the planned Intermediate Fuel Repository, for which suitable sites have been narrowed to two contenders.

The plant, which was controversial when first proposed, has enjoyed nearly two years of widespread support as industry workshops continue to tour the state and communicate the realities of the benefits and risks of new generation nuclear power.

“If you asked me back in 2011, I’d have laughed at you,” said one mother at her suburb’s community centre, standing in front of the now well-known glowing PRISM model.

“But the Fukushima accident still hasn’t caused the death they told us it would, just like the radiation experts said all along. And that sort of meltdown just can’t happen with this reactor, can it?”

This popular support from an already nuclear-curious state was undoubtedly cemented when 12-year old Jayden Ashley of Parafield won the grand prize for his entry in the Main Containment Building design competition.

An executive for the international vendor commented at the time that it was so instantly iconic and intuitive, she didn’t know why they hadn’t already thought of it.

“Of course we’re extremely glad the legal framework’s now in place and that the government continues to embrace the hyper-modernisation of South Australia’s generating capacity,” the vendor’s Adelaide office said over the phone.

The construction industry consortium formed to coordinate site preparation, contracting and module assembly took the news in its stride.

“From the start we’ve proceeded on the understanding that the new regulations are there to facilitate the scheduled completion of this project,” their spokesperson said.

“It is already positively impacting the disused manufacturing capacity of this city, and will shortly begin providing jobs for thousands of people who not long ago still weren’t sure what they were going to do as the auto industry left the country.”

“These are safe, well-paying jobs that will set many of our members up for secure employment in further construction around the country,” echoed the construction union secretary this morning.

The local cement industry, already contracted to supply materials for the basemats, containment and related structures, anticipated a new, sustained era of competitiveness.

“The clean, reliable electricity will boost productivity while lowering our overall process emissions,” said a representative.

“We’ve also been in talks with the reactor fuel recycling people regarding the products they’ll separate from the partially used fuel.

“A lot of people don’t realise that we use isotopes like californium and caesium-137 to ensure the high quality of the concrete that their houses sit on.”

The president of Port Adelaide’s independent community monitoring task force for the project was confident that the regulations were adequate. “Our group was set up and funded to ensure that the plant will be serious about honesty and transparency when it comes to nuclear safety, especially close to an established suburb and a busy harbour.

“I still don’t know if what they say about low-level radiation is true or not, but even if a leak is unlikely or harmless the operator will answer to the community if it lets it happen.

“Even then, though, we know that we won’t have to run for the hills.”

He added, waving in the direction of the old MFP site, “I was definitely anti-nuclear in the 80s and 90s but new designs have addressed most of my concerns, and of course back then no one was worried about global warming.

“We’ve just had our hottest year ever! This plant will make electricity without the carbon, while putting our city at the head of the solution to 100,000 year nuclear waste.” 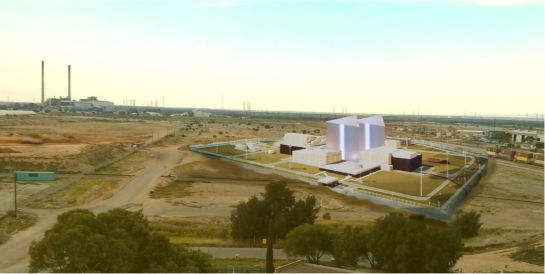 Nuclear energy-related courses have seen a meteoric resurgence in the last two years, with Adelaide’s first graduates expected next year.

“This is what I wanted to do since high school, since I learned that we need to act urgently on climate change.

“South Australia has great sun and wind resources but we simply can’t rely on them to ensure prosperity and actually replace the dispatchable fossil-fuelled electricity we’ve been using till now.

“These reactors can be built where the demand is, using the existing connections.

“Sorry, I just gave a presentation on this stuff. But the arithmetic doesn’t lie.

“Building IFRs and getting paid to accept the fuel for them will keep long term electricity supply reliable and cost-competitive: which provides opportunity to work locally on improving other renewable energy sources like tidal and algae biofuels.”

SAIFEST’s director said later that he had discussions scheduled with metal companies and manufacturers regarding possible new plant locations neighbouring the reactors. “High energy industries don’t want to ignore the problem of emissions any longer,” he commented.

“They will go where the cleanest, most reliable energy is.”

*I am obviously not an artist.

3 thoughts on “Shameless Optimism: An Article from June, 201X”