In my last post I mentioned Argentina, its recent expansion of nuclear capacity and the immediate emissions abatement it now achieves. Well, there’s more. Argentina also reached an agreement this year with a Chinese supplier for its next reactor. The reactor is the EC6. The supplier is China National Nuclear Corporation.

CNNC completed the pair of CANDU EC6s in Qinshan in 5 years. They cost US$2.88 billion. Argentina may not expect quite such aggressive timeframe or cost, but can we please have a break from the stale too-long-too-expensive objection? These guys obviously know what they’re doing, and so does Argentina. We sourced OPAL from Argentina. We could get in on this action. It may be that SMRs are more suited to Australian geography and population densities, and Argentina has streaked ahead there with their CAREM project.

The CANDU EC6 is, of course, the reference reactor from Zero Carbon Options. In a South Australian context, it could run on locally fabricated uranium fuel, made from ore extracted by in situ recovery. Replacing at least 700 MW of what is currently carbon-intensive, lignite- and gas-fired capacity.

A recent sunny, breezy day thanks to empowerme.org. Embellishment is mine. Nuclear contribution and CIPK roughly estimated from Ontario data.

Or maybe we could strengthen ties with South Australia’s sister state in China, Shandong Province – with plans for an eventual six AP1000 units up at Haiyang. They know what they’re doing, too. Do we?

It has been a while, and I won’t sting your eyes with excuses, but only beg forgiveness. I have a more substantial article in the works, but right now, I want to take stock.

My own attitudes to nuclear energy have become rather more accepting ever since my first post, back when I shivered at the notion of monolithic atomic piles such as Windscale. Since that time I’ve made many acquaintances, mostly across Twitter, among the loose network of socially-engaged aficionados and professionals in nuclear energy and related academia and industries, who this year noted the 60th anniversary of the Obinsk reactor reaching criticality and the launch of civilian nuclear energy.

These are the folks I refer to when I observe that opponents of nuclear energy flatly reject the knowledge of experts, and in the process unwittingly partake of the same willful ignorance that climate change contrarians are widely accused of – especially by environmental groups. I could never have developed my current understanding of nuclear energy and radiation without engaging with them and considering their (often differing) views. Refusing to do so, as conventional environmental groups and political leaders still do, is becoming increasingly unjustifiable. By now their supporters should seriously be demanding explanations.

So while the least-justifiable assertion of unacceptable risk of harm from radiation at any dose is looking increasingly like the brontosaurus of nuclear physics, and contrarian environmental groups are starting to focus on entirely more practical and surmountable matters of cost and timeframe, in an Australian context I find myself asking one question:

Does anybody actually believe that the ARPANS and EPBC prohibitions on nuclear should be maintained?

I mean, obviously the inevitable amendments will attract opposition because many will cynically view them as no more or less than a push to build nuclear plants. Realistically though, it would just bring us roughly in line with the rest of the OECD. Modern nuclear reactor designs, their cost, time frames and safety could at last be considered on a commercial rather than theoretical or academic basis. If it is economical to establish modern, efficient uranium enrichment industries in the country with the best reserves in the world, this can also be considered. And if the thorough assessment of proceeding with actually doing these things proves untenable and uneconomical? 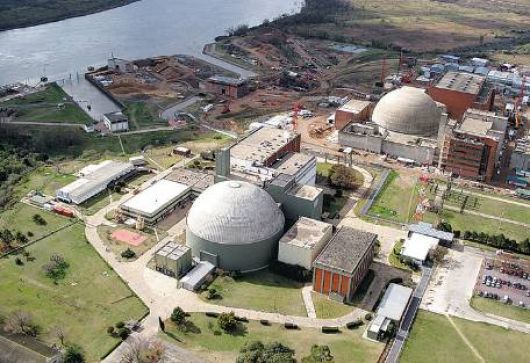 Atucha 2 in Argentina reached criticality and was connected to the grid in June. At an average 90% capacity factor, Argentinians will enjoy 5.88 TWh of ultra-low emissions electricity from this reactor every year for most of this century. Based on IPCC figures, that’s 2.8 million tons of CO2 saved yearly by not needing to run so much of the country’s gas plant capacity. We should learn from Argentina.

If the final analysis says no nuclear for Australia, then ok. Anti-nuclear activists, including our prominent greens politicians, believe this would be the case. They believe intermittent celebrity renewable energies – wind and solar – can do the job of cleanly supplying our future electricity needs. Closer analysis reveals the intrinsic reliance on hydro power, biomass combustion and speculative battery technology. If “not enough renewables” (rather than carbon intensity per kilowatt-hour and other fossil fuel usage) was the existential crisis of our generation, I’d be out in front with the megaphone. Believe me, I wish this was all we needed, because then the path to decarbonisation would be so much easier to pursue. But the honest arithmetic indicates we will need to do much, much more, and it is arithmetic, not ideology, that should guide us.

I’m not an expert, but I reckon we do need nuclear power. So let’s end the ludicrous, arbitrary prohibition, and see who’s right.