Hydroelectricity supplies a small proportion of power to the national market, but the lion’s share of renewable energy. In recent times, South Australia is sometimes touted as the leader in renewables (it is quite sunny and windy here) but in fact Tasmania’s responsive, reliable hydro generation has kept it far out ahead. If it was operated as baseload supply, along with Snowy Hydro as well as Victorian and Queensland capacity (all 60 Twh per year – deemed feasible by BREE), on paper hydro could meet around a fifth of normal peak demand and 31% of average demand based on 2013-14. But it is not and cannot be utilised this way.

With due consideration given to rainfall forecasts, environmental flows, irrigation and drinking water, Australian hydro capacity factor was limited to 19% in 2011-12. Somewhat higher levels of generation were rewarded under the carbon price. Further perspective can be gained from reservoir data supplied by Snowy Hydro and Hydro Tasmania. 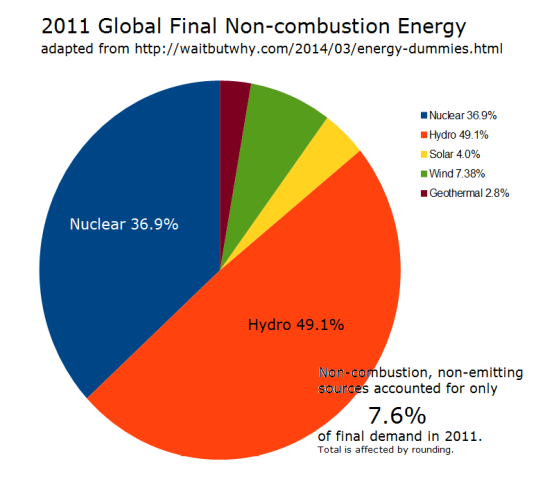 Hydro remains the bulk of the world’s non-combustion electricity generation. Its effective expansion is welcomed by populations in developing countries. However, concerns regarding biological emissions may mean climate action and alleviation of poverty will require an alternative to shoulder the burden of providing reliable and plentiful electricity.

Environmental flows as well as supply to Australia’s food bowl regions may not be sexy headlines these days but Australia should be focusing on ensuring their security. Coupling reliable nuclear-powered desalination on the lower east coast with either large-scale offset of coastal and metropolitan water demand, or physical transport up to the hydro reservoirs themselves could achieve this on a scale not seen since hydroelectricty was initially expanded last century.

When the Snowy Mountains Hydroelectric Scheme was built in the later part of the last century… it was seen as a wonder of engineering. A young country, calling on skilled people from around the world, to complete a massive project that would deliver water for agriculture, and be paid for by supplying electricity to a growing nation.
~ Steve Liebmann

A week from last year that I noted for high, somewhat sustained winds. Consider the contributions of wind and hydro to overall NEM demand, the way hydro more (at low wind) or less (at high wind) follows that demand.

A close-up of the dance.

Nevertheless, hydro appears to be a considerable factor in demonstrated low-emissions regional grids: