In the early nineteenth century my home state had been freshly colonised by the British. Despite the establishment of agriculture the land owners and pioneers were reliant on essentials like flour bought from New South Wales. One pioneer, John Dunn, brought with him the knowledge of milling.

His first mill, a wind-powered affair was rapidly superseded when the Watts beam engine was brought out to Australia. The steam-powered mill he built in what would become the town of Mount Barker was able to produce flour around the clock. It would have used wood, a fuel in plentiful supply. Similar engines helped modernise the fledgling mining sector. More steam mills were built by Dunn, who’s business grew to employ hundreds and benefit the entire state as reliance on the eastern states diminished.

I now live in this town, and I look out my window and see none of the environmental devastation this historical economic growth may imply to some people. There’s the odd old quarry and plenty of cleared cropland; there’s also sizeable wetlands and bushland corridors. 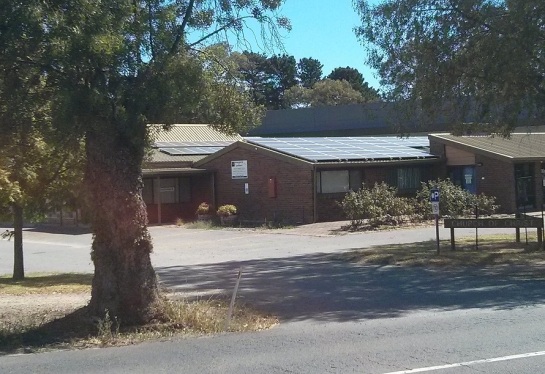 I do see solar panels on roofs, though. Church roofs, especially – coated with them like doped silicon frosting. Electranet and the grid operator, AEMO, last year assessed the implications of continued expansion of solar and wind capacity in South Australia. 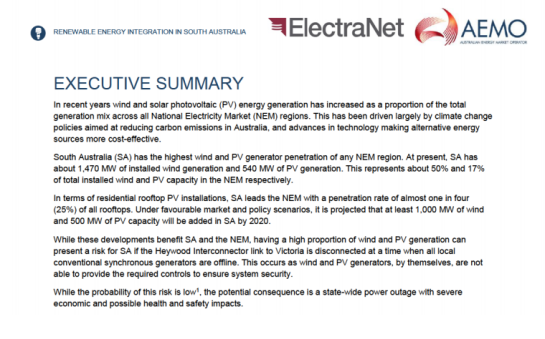 The impression that it is technically feasible for South Australia’s grid to be fully renewable is undoubtedly appealing for many people. (If this is concurrent with effective decarbonisation – a much less emphasised detail – then it certainly appeals to me.) But to seriously consider it will force them to wrap their heads around what is meant by “system security”.

Anyone who has operated a household appliance should have noticed there’s a silver sticker with numbers on it. Among them will be stated the input frequency of alternating current (AC) – 50 Hertz in Australia. It turns out that that is crucial – the people whose job it is to balance demand and supply on the power grid need to keep this frequency constant or it means, at worst, damaged generators and blackouts. So where does this frequency come from?

From the generators themselves, the physically spinning turbines which rotate (effectively) fifty times per second.

This is why AEMO stresses that SA’s Northern, Torrens Island or Pelican Point fossil-fired stations would need to be retained for “ancillary services”. Solar generates direct current (DC) that is transformed to AC by the inverter – but this relies on the established grid frequency. For their part, wind turbines are rotating masses generating current which must also be electronically matched to 50 Hertz. (You won’t see a wind turbine spinning that fast!)

Relatedly, the inertia of these stationary, dispatchable spinning masses is vital for stabilising every addition and subtraction of load and source on the grid and the attendant pressure on the frequency.

So in the best case scenario, we have a fossil fueled plant combusting away just to provide grid frequency and inertia, even on bright sunny days and windy nights. Or South Australia decommissions its coal and gas generators (which decarbonisation somewhat implies) and relies entirely on the rest of the NEM, through the Heywood AC interconnector, for these ancillary services so that we can safely use, well, everything we already have.

If this turns out to be the best way to cut Australia’s carbon intensity, so be it. But if Queensland, New South Wales and Victoria want to “follow SA’s lead” and substitute fossil combustion for renewables – while avoiding relying on climatically sensitive hydro generation for grid stability – I can envision a few problems.

In the meantime, not for bread but high quality energy – grid stability and electricity to run our refrigerators, power our hospitals and charge our future electric vehicle fleet when renewables are not generating – will we once again be reliant on the eastern states? 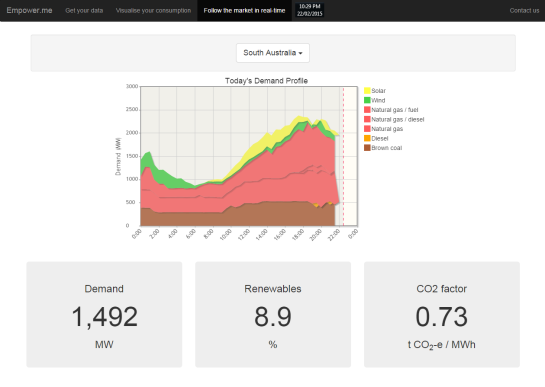 Without steam, it can be a long day at the millstone.

Whenever we use energy it is to free ourselves from some natural condition: to be warm in winter and cool in summer, to stay up after dark, to eat out of season, to escape hard labor, to leave the local patch of terroir where we sprouted and see the world. These are all acts of liberation, and they require abundant power and technical ingenuity.

Maybe John Dunn could not fully appreciate what he wrought for his new home state, but we can. Will we end up limiting our liberation by limiting our energy options?

3 thoughts on “The Millwrights”