The announcement of a Nuclear Fuel Cycle Royal Commission for South Australia surprised practically everyone. Should it have? When this state sits on a significant portion of global uranium reserves? Wasn’t something like this inevitable?

Protestations from traditional Australian nuclear opponents were immediate and shared a common theme: the inquiry is unnecessary. This is our first hint that they are worried. It most certainly is necessary, given:

They hurried to reiterate their favourite objections: nuclear’s not low-carbon enough (it is); the Japanese exclusion zone is uninhabitable (it isn’t); nuclear is a failed, ailing technology (it’s flourishing, though not enough); there’s no room for both it and renewable energy (what the heck?). And so on. 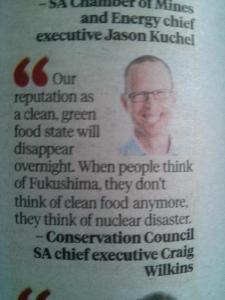 Then, the announcement by Senator Sean Edwards of an ambitious vision for a revolutionised nuclear fuel cycle centred in SA – reminiscent of my Radio National talk – with the potential to revitalise our region, promote the growth in nuclear energy recommended by the IPCC, and slash our state electricity emissions and rates, and which directly addresses the concerns over costs and waste. The senator spelled out the errors of stubborn nuclear opponents. Variations on the stale objections dutifully followed.

Predictably, Karecha and Hansen‘s analysis of lives saved and emissions abated globally by convectional nuclear power was carefully ignored – even the published attempt at rebuttal was left uncited by its own author. It was a bit of a disaster last time, after all. As Ben Heard observed:

The study quoted by Kharecha and Hansen is “Prevented mortality and greenhouse gas emissions from historic and projected nuclear power”, published to the journal “Environmental Science and Technology”… When academics resort to cheap shots in a comment thread, it is symptomatic of a weak underlying argument.

So what the heck is going on?

A recent evaluation of related attitudes to climate change action presented to the Canadian Nuclear Association by Dr Matt Nisbet may provide a framework.

Clearly, the potential contribution of advanced nuclear energy has been neglected and its rejection is part of the identity of renewables+efficiency academics and anti-capitalist downwingers. Ecomodernism strives to transcend this and other limitations and fearlessly illuminate the optimum path. It’s about dialogue… which is hard when the other guys refuse to engage.

Let them submit their objections to the Royal Commission. Let the evidence be weighed. If they sincerely believe they are doing good work, that the drawbacks of nuclear are overwhelming, they should be more excited by this inquiry than we are as it will prove them right. Right?