This was written a little before the publication of Qvist and Brook’s peer-reviewed article that sets out the potential for rapid global electricity decarbonisation through adoption of modern nuclear energy at a rate comparable to what France and Sweden demonstrated – while growing healthy economies – last century. Read it here.

Let’s get excited about what nuclear can do for us. It’s about time, after all, and we have a lot of reasons. New designs are available which need only the fuel that is already mined and refined. Serious accidents result in only localised and wholly underwhelming physical consequences by any professional estimation. Adequate management mitigates this risk.

It can also scale at a rate necessary to both potentially help avert fossil fuel commitment in developing nations, and enable the sort of global emissions cut required by IPCC scenarios. Such was highlighted in a paper out of the University of Adelaide, citing national historical nuclear megawatt hour addition rates, annualised and levelised by population. Working with the relatively modest average rate achieved by France in the 80s, an ultra-low emissions system of renewables underpinned with nuclear power was shown to be quite realistic by 2060. No hourly grid simulations necessary. Prioritise all appropriate technology, especially what has been repeatedly proven, and concentrate on decarbonisation instead of technological tribalism.

It’s quite possible that it didn’t need to be this way. As alluded to, there was a time when reactors were being brought online rather regularly, and it’s plausible that the trend didn’t need to end. In this article, the consequences of the potential sustained nuclear rollout were quantified for the US and the world. 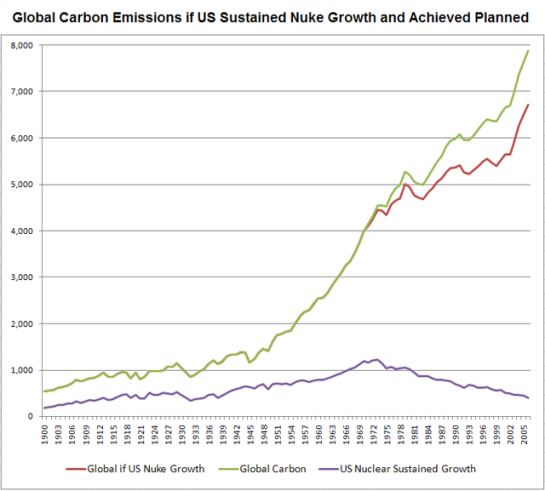 I invite readers to extrapolate then where the total global carbon emissions would be if all the post-industrialized nations had adopted nuclear power – as their natural technological progressions would have dictated – if it were not for the hijacking of this process by anti-scientific hyperbole by scaremongering environmental activists. Many organizations – such as Green Peace, still ardently oppose nuclear power. And these levels, mind you, are only about one-tenth of what the Atomic Energy Commission was projecting based on demand during the 60s, where at its height 25 new nuclear power plants were being built every year, and the AEC anticipated that by the year 2000 over 1,000 nuclear power plants would be in operation in the U.S.

Inspired by these calculations, I posed a hypothetical for Australia: If, instead of instituting the prohibition of nuclear energy in 1998, the Democrats and Greens had involved themselves legitimately in working towards proven coal power-replacing nuclear energy, with an appropriate focus on safety and environmental protection.

The CANDU EC6 (now offered as the AFCR) is a reactor of appropriate size for the Australian grid, with a track record of swift build times. Assuming only one started per year following a conservative period for IAEA-assisted regulation establishment (cf. adoption in the UAE), environmental impact assessment and so on, an extra year at the start for FOAK, and assuming megawatt-for-megawatt replacement of coal, what would IEA-sourced national emissions intensity look like?

An incontrovertible downward trend, with over 9% extra reduction by 2012. This is indeed roughly equivalent to France’s average build rate as given in the above paper.

How has 25 years of appeasement of the anti-nuclear movement affected Australia’s contribution to heating the planet? pic.twitter.com/dj2z0MMnre

This isn’t limited mitigation by favoured intermittent renewables, or a temporary dip due to vagueries of carbon pricing. It is sustained and historically proven climate action which has been deferred since the nineties.

West European countries including the E C may be able to stabilize or reduce C0 2 emissions by early in the next decade through a variety of measures including taxes, energy efficiency programs, nuclear power, natural gas, and renewables…

Both the potential impacts of climate change and the decarbonisation success of French electricity were known in the nineties – certainly not as immediately available to all as they are now, but known. Granted, nuclear was particularly unpopular, too, but the ideological opportunism of the Greens and Democrats ensured that it stayed that way while the world warmed. 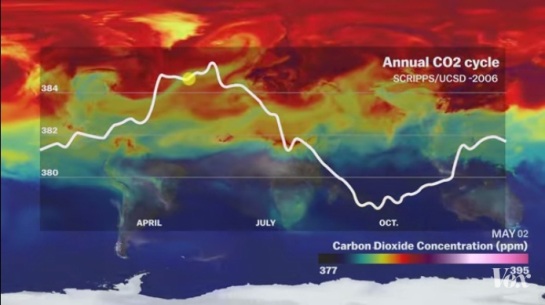 In hindsight, I feel particularly stung by this situation as I was a Greens and Democrats voter since I’ve been eligible.

But this goes back further than France, or climate change. It goes back before the regulatory ratcheting and uncertainty, the escalation in labour costs, the exceptionally impermanent goal posts between which the first nuclear era was forced to kick. (Incidentally, if you thought this ratcheting all happened in the past, think again: the US regulator is considering cutting the utterly adequate current worker exposure limits by 60% – regardless of cost – merely to be consistent with Europe.) 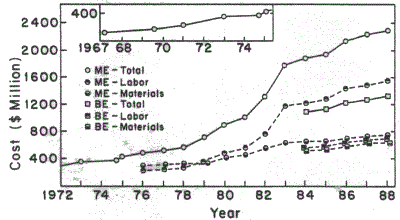 “While there is little difference in materials cost, we see from Fig 1 that the difference in labor costs between M.E. [median experience] and B.E. [best experience] plants is spectacular. The comparison between these is broken down in Table 1. We see that about half of the labor costs are for professionals. It is in the area of professional labor, such as design, construction, and quality control engineers, that the difference between B.E. and M.E. projects is greatest. It is also for professional labor that the escalation has been largest — in 1978 it represented only 38% of total labor costs versus 52% in 1987. However, essentially all labor costs are about twice as high for M.E. as for B.E. projects.” 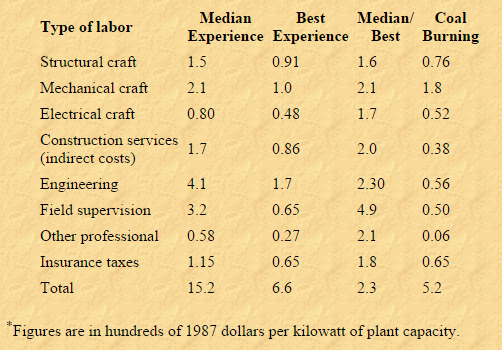 Table 1: Breakdown of labour costs for nuclear power plants and coal-burning power plants from the 1987 EEDB*

It goes all the way back to the fifties, the era of the Shippingport reactor, the Experimental Breeder Reactor I and a petroleum geologist named Marion King Hubbert. Hubbert was the first to observe how fossil fuels would run out, and make predictions regarding when. Oil companies didn’t like this, but he was famously proved right when US oil production peaked in 1961. It seemed Hubbert wasn’t worried though. He grasped the potential of peaceful nuclear energy. Crucially, he saw breeder reactors enabling the full utilisation of uranium and thorium fuels into the far future, at a time when their supply was believed to be limited. Doubtless, oil companies liked this even less.

…It appears that there exist within minable depths in the United States rocks with uranium contents equivalent to 1000 barrels or more of oil per metric ton, whose total energy content is probably several hundred times that of all the fossil fuels combined. The same appears to be true of many other parts of the world. Consequently, the world appears to be on the threshold of an era which in terms of energy consumption will be at least an order of magnitude greater than that made possible by the fossil fuels.

Today, we know we have plentiful economically recoverable uranium, even assuming the greatly expanded role nuclear energy still needs to play in the coming decades. This uranium is in no way wasted by use in conventional reactors – the resulting recyclable fuel, along with the depleted uranium left over from enrichment, is all fast reactor fuel. Indeed, it has scant other constructive use.

Greens in Europe doggedly pursue the total phaseout of nuclear, apparently above all else; their affiliates in America are equally stubborn. More locally, the last we heard from our Australian Greens was an insular maintenance of their traditional rejection, but apparently without reference to intractable nuclear waste or ecological hazards.

Indeed, further work from our Adelaide authors has demonstrated the future benefits to biodiversity provided by a renewed focus on expansion of nuclear capacity. At this point we should all be wondering who in their right mind would try to justify a prohibition of nuclear technology as part of an Act concerned with Environment and Biodiversity Protection. Even opponents who generalise that it’s “too expensive” or “takes too long” cannot rationally use that to maintain an outright ban. Moreover, that these drawbacks are somehow intrinsic to the technology, under all that ratcheted regulatory burden, is clearly false.

There has been cost associated with penetration of wind and solar in the last decade, and they have contributed to emissions mitigation. There will be cost in maintaining Australia’s legacy hydro capacity. When nuclear is finally legal here, there will be costs. Should we accept the ratcheted, exorbitant costs that have shackled the technology in the west – particularly in aspects where there’s no associated demonstrable benefit? Or can we recognise the urgency of addressing emissions using all the tools in the box and be really smart about it?

To paraphrase the new federal Greens leader Richard Di Natale, we should always be guided by the science. He has rightly made his and the Greens’ support for childhood vaccination unequivocal. The biology behind vaccination is the same that underpins the development of biological weapons of mass destruction. Separating the two is obvious and exclusively pursuing the benefits of vaccination, despite fringe opposition, is straightforward. Why then do Greens have such difficulty with the comparably valid distinction between commercial nuclear energy and the Bomb? How much longer will they treat nuclear the way they do?