But the Greens’ [motion congratulating US President Barack Obama for his recent Executive Order requiring the reduction of greenhouse gas pollution] conveniently left out five very important words that also appeared on that same Executive Order:

Everyone knows that nuclear energy is a subject which Greens senator Scott Ludlum feels compelled to opine upon, while feeling no need to consult with the professionals and researchers who actually work in this highly specialised, technical area of science and engineering. Compelled to the extent of interrupting other senators.

On the whole I probably side with Ludlam and not Day on most issues. But the Greens leadership is demonstrably deluded on nuclear energy and other scientific areas. My own initial feeling was he’s wrong. But hold up. Step back. This is exactly the sort of complex topic which, whilst confrontationally dismissed by nuclear opponents, deserves the kind of proper investigation which they would never expend on it.

Most people would have an idea what “small modular reactors” must be, but we should be specific. Beyond shrinking down the components of a conventional nuclear power plant, a SMR will integrate fuel cell, heat exchanger, pressuriser and every other part of a nuclear steam supply system (NSSS) all within the one pressure vessel. This is the essence of the integral pressurised water reactor (iPWR) or integrated reactor vessel (IRV) approach, and it was in fact demonstrated decades ago for naval propulsion in a few specific cases.

One example was the compact K48 reactor which powered the French Rubis class submarines. Another was the power source for the German Otto Hahn cargo vessel. The reactors for vessels in the US navy – like the eight units possessed by the USS Enterprise which docked uneventfully at the senator’s home city twice – were small, highly uniform, but not integral.

As for modular, maritime reactors, like almost all others, are assembled from ordered components but are not produced on assembly lines. This is a crucial distinction when considering SMRs. Other sophisticated modern machines which demand extremely high quality control, the correct functioning of which countless peoples’ lives depend on every day, are routinely factory assembled from mass produced modules.

In the last two decades this approach has already showed promise in the construction of the ABWR, the CANDU 6, the APR1400 and most recently the AP1000, all of which were assembled on site, to a greater or lesser extent, from factory-fabricated modules.

But designing in modules and moving fabrication into factories doesn’t automatically translate to lower overnight costs. A thorough 2013 study by Argonne National Laboratories and the Illinois Institute of Technology identified where costs can be controlled and potentially reduced. While a learning rate can be anticipated for production of identical components, the most rapid and dramatic cost reduction can be realised by preempting the learning rate and maximising the amount of preexisting knowledge – labour, management, compliance – at the outset. This learning transfer works best for high volume components like fuel assemblies and steam generator tubes. The other important factor is lot size which enables a learning rate cost reduction on more novel components between lots. This reduction appears greater for lots of 1, while it’s overall initially lower for lots of five, with costs spread equally across all units of each lot, demonstrating the advantage of a fuller orderbook. 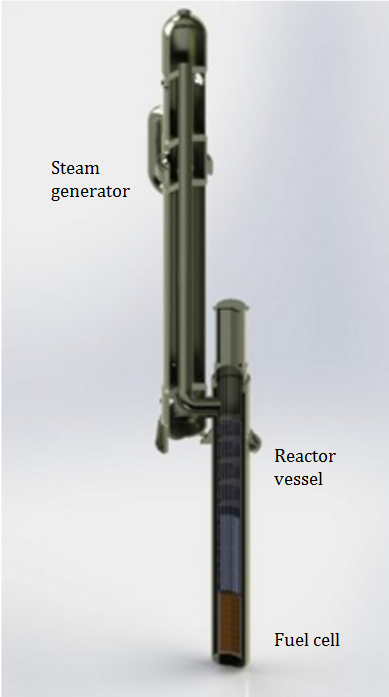 Small, compact and integrated. Factory-fabricated modules. No, these reactors don’t exist yet. But for how long can anyone keep saying that?

Holtec is an international nuclear components and services company with 30 years of industry presence. Among its many capabilities is the supply of dry casks for interim used fuel storage. The first such have sat inertly at Surry nuclear power plant in Virginia since 1986. It’s fair to say that Holtec has a handle on nuclear engineering, and this is being applied to the development of an SMR. This 160 MW model will be an iPWR with a small low enriched uranium core cooled entirely by convection and gravity. There are no penetrations around the base of the pressure vessel, so loss of coolant isn’t a credible scenario, while a large water inventory ensures indefinite cooling in all circumstances. It’s housed below grade, shielded from impacts. The design grants every nuclear opponent’s entire safety wish list.

We have a substantial program here. This design has been under development for approximately five years. We are an efficient organisation; after all, we design and manufacture capital nuclear equipment for the nuclear power industry. We are the largest exporter of capital nuclear equipment in the United States. One would suggest that we know how to do it better and quicker than other people. It’s not an experience or a learning path for us.

There are numerous SMR proposals – why highlight Holtec? Holtec provided detailed testimony to the South Australian Nuclear Fuel Cycle Royal Commission in 2015, explaining that it already has a large factory, and is currently building more. It’s investing in a half-scale integral effects test to proactively prove the SMR-160 design and others, while anticipating the construction of the prototype at the Savannah River site in South Carolina. Under a reasonable licencing framework Holtec expects licence application to grid connection to take 7 to 8 years.

This technology is being directly supported at the highest levels of US energy policy. Development is privately funded and supported by decades of engineering and construction experience. How much longer will opponents be interrupting discussions of modern nuclear energy when they hear the term “SMR”?

SMR progress isn’t confined to the US. Argentina launched its flagship CAREM project several years ago, with completion of the 25 MW prototype expected at Atucha by 2019, and construction of a 100 MW model to follow. It remains to be seen how rapidly Argentina can grasp nascent global market share.

The SMR story only gets brighter when considering advanced designs based on radically different fuels and coolants. Terrestrial Energy, headquartered in Canada, will take every lesson learned in Oakridge’s pre-1980s molten salt reactor research and commercialise a liquid-fueled SMR which overturns issues of cost, waste and proliferation. Continuous flexible and economical operation of sealed, factory-serviced Core units for 7 years straight connected to off-the-shelf steam generators and turbines will provide up to 291 MW of electricity, or alternatively, high grade industrial heat at over 600°C to directly replace gas combustion. Indeed, the entire design philosophy revolves around achieving a walk-away safe, economical and versatile reactor with no technical or regulatory barriers to deployment in the 2020s.

The interest these vendors have in the embryonic South Australian market is clear. We must closely consider the motivations of Australian politicians who dismiss them entirely, and attempt to perpetuate malinformed blanket opposition. Sure, “nobody has built one”.

Nobody is going to build just one.