When I reflect on the gradual yet probably immeasurable damage wrought by Amory Lovins and groups like Friends of the Earth, to whom he was an influential thought leader…

In an electrical world, your lifeline comes not from an understandable neighborhood technology run by people you know who are at your own social level, but rather from an alien, remote, and perhaps humiliatingly uncontrollable technology run by a faraway, bureaucratized, technical elite who have probably never heard of you.

… I tend to recall the wisdom of Pirsig in the opening chapter to his seminal book Zen and the Art of Motocycle Maintenance.

Other things fit in too. They talk once in a while in as few pained words as possible about “it” or “it all” as in the sentence, “There is just no escape from it.” And if I asked, “From what?” the answer might be “The whole thing,” or “The whole organized bit,” or even “The system.” Sylvia once said defensively, “Well, you know how to cope with it,” which puffed me up so much at the time I was embarrassed to ask what “it” was and so remained somewhat puzzled. I thought it was something more mysterious than technology.

But now I see that the “it” was mainly, if not entirely, technology. But, that doesn’t sound right either. The “it” is a kind of force that gives rise to technology, something undefined, but inhuman, mechanical, lifeless, a blind monster, a death force. Something hideous they are running from but know they can never escape. I’m putting it way too heavily here but in a less emphatic and less defined way this is what it is. Somewhere there are people who understand it and run it but those are technologists, and they speak an inhuman language when describing what they do. It’s all parts and relationships of unheard-of things that never make any sense no matter how often you hear about them. And their things, their monster keeps eating up land and polluting their air and lakes, and there is no way to strike back at it, and hardly any way to escape it.

That attitude is not hard to come to. You go through a heavy industrial area of a large city and there it all is, the technology. In front of it are high barbed-wire fences, locked gates, signs saying NO TRESPASSING, and beyond, through sooty air, you see ugly strange shapes of metal and brick whose purpose is unknown, and whose masters you will never see. What it’s for you don’t know, and why it’s there, there’s no one to tell, and so all you can feel is alienated, estranged, as though you didn’t belong there. Who owns and understands this doesn’t want you around. All this technology has somehow made you a stranger in your own land. Its very shape and appearance and mysteriousness say, “Get out.” You know there’s an explanation for all this somewhere and what it’s doing undoubtedly serves mankind in some indirect way but that isn’t what you see. What you see is the NO TRESPASSING, KEEP OUT signs and not anything serving people but little people, like ants, serving these strange, incomprehensible shapes. And you think, even if I were a part of this, even if I were not a stranger, I would be just another ant serving the shapes. So the final feeling is hostile, and I think that’s ultimately what’s involved with this otherwise unexplainable attitude of John and Sylvia. Anything to do with valves and shafts and wrenches is a part of that dehumanized world, and they would rather not think about it. They don’t want to get into it.

If this is so, they are not alone. There is no question that they have been following their natural feelings in this and not trying to imitate anyone. But many others are also following their natural feelings and not trying to imitate anyone and the natural feelings of very many people are similar on this matter; so that when you look at them collectively, as journalists do, you get the illusion of a mass movement, an antitechnological mass movement, an entire political antitechnological left emerging, looming up from apparently nowhere, saying, “Stop the technology. Have it somewhere else. Don’t have it here.” It is still restrained by a thin web of logic that points out that without the factories there are no jobs or standard of living. But there are human forces stronger than logic. There always have been, and if they become strong enough in their hatred of technology that web can break.

Cliches and stereotypes such as “beatnik” or “hippie” have been invented for the antitechnologists, the antisystem people, and will continue to be. But one does not convert individuals into mass people with the simple coining of a mass term. John and Sylvia are not mass people and neither are most of the others going their way. It is against being a mass person that they seem to be revolting. And they feel that technology has got a lot to do with the forces that are trying to turn them into mass people and they don’t like it. So far it’s still mostly a passive resistance, flights into the rural areas when they are possible and things like that, but it doesn’t always have to be this passive.

I disagree with them about cycle maintenance, but not because I am out of sympathy with their feelings about technology. I just think that their flight from and hatred of technology is self-defeating. The Buddha, the Godhead, resides quite as comfortably in the circuits of a digital computer or the gears of a cycle transmission

(or the fissioning core of a nuclear reactor)

as he does at the top of a mountain or in the petals of a flower. To think otherwise is to demean the Buddha… which is to demean oneself. 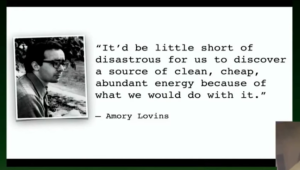 We are facing intertwined climate and energy access challenges to which self-styled visionaries of the 1970s paid no mind, despite the warnings of technologists like Alvin Weinberg.

I wonder how well ideas inspired by a UK coal industry representative – as Mr Lovins’ are – would fly with environmentalists if they were introduced today? Our present challenges are simply on a different scale to technology-averse local movements and unquestioning devotion to a misapprehension of efficiency. The thin web of logic which connects solar panels to the gigantic foreign factories they come from mustn’t break.

Mr Lovins had it backwards then and he has yet to make amends.

We know what we’ll do with it. We’re going to save the day.

One thought on “Running From Technology Down the Path Mistaken”