The West Wind project on the southern tip of New Zealand’s North Island is an array of 62 2.3 megawatt Siemens turbines. It generates 550 gigawatt-hours per year for Wellington to the east, indicating an average capacity factor of 44% – one of the highest in the world for onshore wind, which is obvious considering the geography. New Zealand’s rich hydro capacity can be ramped to compliment West Wind’s contribution. The farmland isn’t greatly impacted by the towers and roads. This is exactly what I’m thinking of when I profess in-principle support for wind-power: right location, right conditions, right technology mix.

I also feel a bit of an emotional connection to this project as I was honeymooning at Princess Charlotte Sound around the time it was being constructed across the water. I saw a staging yard from the road that contained the huge tower segments, presumably being prepared for transport by barge. I may be making spurious connections here but the timing fits. 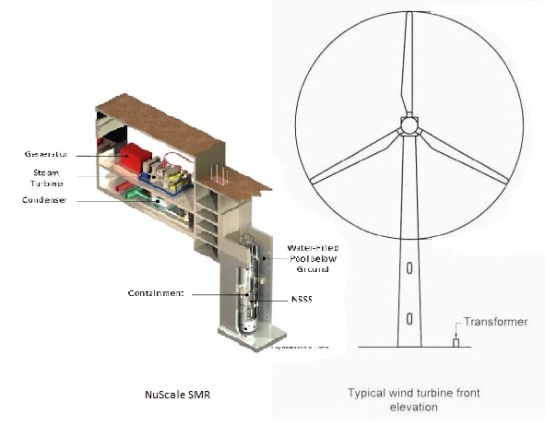 A rough scale comparison. Image adapted from here and here.

But… we are well on track to a long-speculated future featuring small modular reactors. The NuScale naturally circulating, inherently safe reactor will stand 24.4 metres tall in its containment, compared to an average turbine tower height of 50 metres. This SMR integrates its steam generator within its pressure vessel, but even adding the size of an appropriate turbine, it is still “smaller” than a single wind turbine. Sure, the associated plant is spread over more area… but one 50 MW NuScale unit running for a year will provide 440 gigawatt-hours of fully dispatchable electricity – 80 percent of West Wind’s entire variable output. The SMR is intended to be built and installed by the dozen, in an area of 44 acres, with a design life of sixty years. It is mostly steel and concrete – but far less than what is needed for wind farms, per kilowatt-hour. 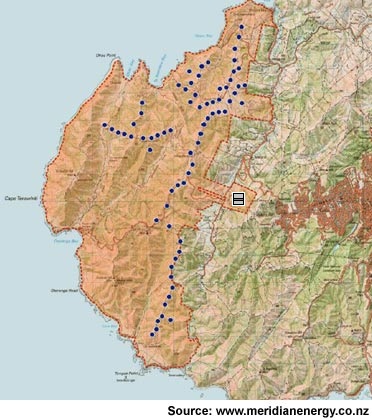 The approximate scale comparison of the two generation technologies.

Everything about this approach to providing electricity is more, and in a more compact package.

Now, this hardly constitutes a feasibility study into nuclear power for New Zealand. I’d be surprised if the North Island ever needs a whole 600 MW plant. I’m with @millysievert: I talk about the potential for plentiful energy but 100% nuclear power nearly anywhere is probably not going to happen. What is vital is to maintain perspective on the realistic proportions of future energy offered by different technologies.