The South Australian Labor government has announced a Royal Commission into our nuclear future. 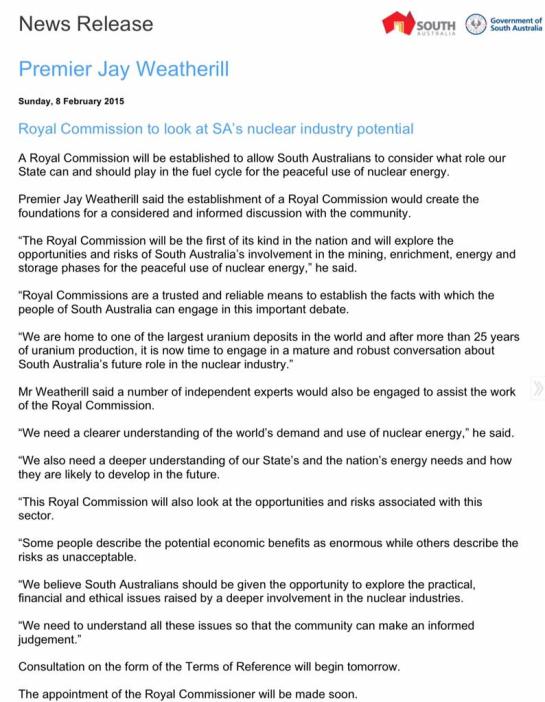 While this is wonderful feedstock for speculation and cause for hope in effective future climate action on Australia’s part, some vital points must be examined.

Royal Commissions are a trusted and reliable means to establish the facts with which the people of South Australia can engage in this important debate… It is now time to engage in a mature and robust conversation about South Australia’s future role in the nuclear industry.

Calling for an elevation in sophistication of the debate was going to be the subject of my next article. There’s probably no better framework with which to ensure precisely this than a royal commission. The response from Greens leaders is a sterling example of the rejection of such sophistication.

In an unstable world, where one person with a suitcase of radioactive material could make an entire city uninhabitable with a so-called dirty nuclear bomb, we should not be enhancing the chance of that happening.
(Mark Parnell MLC)

Throwing around paranoia about dirty bombs is a dreadful start.

“Lead me, follow me, or get out of my way.” ~ General George S. Patton

When confronted by one who rejects the science of climate change, we naturally cite the work of recognised experts in climate science to refute erroneous beliefs, ideally to persuade our opponent but additionally to ensure the most reliable knowledge is on record so non-participating onlookers may judge for themselves. Likewise, authoritative information from experts in radiation and nuclear energy is easily sourced these days; many of them are approachable via email, forums or personal messaging. Yet Greens leaders and similar environmentalists flatly refuse to consult what is, no more and no less, another set of experts. They have disempowered themselves as leaders, and have left themselves only two other choices.

This royal commission will also look at the opportunities and risks associated with this sector. Some people describe the potential economic benefits as enormous while others describe the risks as unacceptable.

While the economic benefits of supplying fuel for nuclear energy generation, safe disposal of nuclear material and even future technology uptake will doubtlessly be assessed by the Royal Commission, alternately describing the risks as unacceptable – even in the face of committed climate disruption linked, in part, to our carbon-intensive energy use – is fundamental to the above-described failure of leadership. Unacceptable is a big call. On what is it based? To hazard a guess, Helen Caldicott‘s efforts over the decades probably had something to do with it. As made clear in a recent interview she has no radiation science qualifications and avoids listening to anyone who does. Her unsupportable position was most famously exposed by the UK’s George Monbiot.

To provide another famous example, Arnie Gundersen is looked to as an expert-rejecter’s expert on nuclear matters. He is not an engineer, let alone a nuclear one, but never corrects the record and exploits all the authority it tacitly bestows. His dire predictions regarding the Fukushima Daiichi nuclear accident also turned out to be wrong and misguided, yet helped fan damaging fear and panic.

The scary pronouncements of such ideologues surely provide profitable click bait but are atrocious for informing environmental leadership.

Industry and business – who, after all, provide employment and investment  – entirely support this announcement, and so do I. I’m confident that the majority of South Australians also do, at least as a way to achieve its intention: [to] explore the opportunities and risks of South Australia’s involvement in the mining, enrichment, energy and storage phases for the peaceful use of nuclear energy. And yes, that would include a whole lot of Greens voters.

A note on renewable and distributed energy

The other unfortunate objection has been to declare this royal commission a threat to renewable energy in our state. Framing the discussion as a contest is and always has been a mistake. The effective limits of variable renewable energy are entirely independent of what nuclear power – were we to eventually adopt its use – can provide. The technologies do different things, and no serious commentator I know of is suggesting nuclear replace renewables. Look at it this way: could you replace a wind farm with a solar PV plant of similar capacity and expect the same rate and duration of electricity production? Adding nuclear’s potential expands the variety of capabilities, and all towards the decarbonisation of our electricity supply.

Of course, there are some who even reject solar and wind farms, along with coal and gas plants (not to mention nuclear, of course) as undemocratic, centralised energy sources. I’m sure such idealists, to whom the narrow way forward is in decentralised, local energy production, will not be excluded from the consultation process. For a critique of this naïve approach, see here (I do not endorse the dualistic political framing, but it’s an incisive article). What I’d really like to know, amoung other considerations, is how centralised factories in foreign countries for mass produced solar panels, batteries, microelectronics, and so on, fit into this philosophy.

A note on thorium

Thorium, as a purely fertile nuclear fuel, does not require enrichment, and its contribution to the potential benefits of pursuing an expanded nuclear sector are limited unless it is eventually utilised in heavy-water moderated reactors or the popular thorium-fueled molten salt reactor. However, by developing experience with radioactive waste storage as part of a nuclear sector expansion in South Australia, the thorium by-product of rare earth mining could be inexpensively secured. This would potentially aid the domestic production of sought-after rare earth elements and enable further development of value-adding industry. Rare earths are used in virtually all electronics, and diversifying their market abundance will only improve the rate of technology development.

A few notes on energy numeracy

Energy policy wonks tend to use a framework of technical terms, and a considered, informed discussion around nuclear energy benefits greatly from a basic understanding of said terms. Although actual power production has so far been flagged as unlikely, if I’m going to join the call for an informed discussion, the least I can do is try to explain some of the more frequently used terms: