It’s that time again when the stale old narrative gets a superficial rewrite over at The Conversation. This guest post consists of Luke Weston’s reply.

Let’s take a quick look at all the source material that Diesendorf cites in this piece.

As Hans Bethe puts it in the preface to “The Road from Los Alamos”, “I have also worked with the Union of Concerned Scientists on arms control, but I have never become a member because it also opposes the generation of nuclear power for peaceful purposes – a position with which I do not agree.”

Mycle Schneider was responsible in 1983 for establishing the Paris branch of WISE, the World Information Service on Energy – an anti-nuclear-energy activist organisation whose coy and mendacious name is essentially the nuclear energy equivalent of the Australian Vaccination Network. The WISE website proudly self-describes Schneider as an anti-nuclear-energy activist. ( http://www.wiseinternational.org/node/1885 )

Antony Froggatt was the Greenpeace International Nuclear Policy Campaigner from 1989 to 1997, as well as the representative of Greenpeace International for Central and Western Europe and the former Soviet Union. The first of Schneider and Froggatt’s “World Nuclear Industry Status Reports” was issued in 1992 as a joint publication between Greenpeace International, WISE Paris and the World Watch Institute. The second and third iterations of their report, in 2004 and 2007, were commissioned by the Greens EFA Group in the European Parliament.

Neither author appears to have any technical experience or qualification in nuclear engineering, physics, or any related discipline. Furthermore, this report suffers from the problem of reducing all nuclear power plant operations, all fuel cycle activities, all state-owned nuclear power operators as well as commercial operators, and all research and development both in the public and the private sector all around the world into this concept of the monolithic “Nuclear Industry”. This is the classic meme of the “Big Industry” – the monolithic big-business conspiracy boogeyman we see often cited by anti-nuclear energy activists, anti-GMO activists, anti-pharmaceutical activists and the like.

Once again, this is nothing more than another non-peer-reviewed anti-nuclear-energy activist website. Obviously there’s nothing genuinely impartial and “independent” here at all. The “World Nuclear Industry Status Report” is not subject to any kind of peer-review or genuinely independent fact-checking or oversight – it’s really just a report published on the website of a group of anti-nuclear-energy activists. It has no more peer review, and no more credibility, than the work that Storm van Leeuwen and Smith have self-published on their own website, for example.

This is a good example of the problem with seeking out only “independent” data that fits the predetermined ideology, and finding “independent” sources that have about as much intellectual integrity as people on the Internet who publish their own passionate reports and research about the dangers of smart meters and wind turbines, or the dangers of vaccination, fluoridation and chemtrails.

It contradicts the best available peer-reviewed science and epidemiology we have concerning Chernobyl, the international work of the Chernobyl Forum etc.

So you’ve posted one peer-reviewed source on this subject in the form of the IARC paper, but you’re apparently not happy with “how bad” they say it is, so you add a non-peer-reviewed source making extreme outlier claims and say that this is a range of credible estimates.

The Yablokov book has been reviewed and substantially criticized by health physicists – for one example of a review in the peer-reviewed literature see Radiat. Prot. Dosimetry (2010) 141 (1): 101-104. (http://rpd.oxfordjournals.org/content/141/1/101

The Int J. Cancer paper you linked to is the only source provided here which comes from any kind of peer-reviewed credible source, and obviously extremely different to what Yablokov et al claim.

In a nutshell, to reduce it down to a single three-panel comic strip, this is the problem:

With the exception of one paper in Int J. Cancer, your entire piece is completely lacking any references to peer-reviewed science – plenty of links to non-credible activist websites though. Not one of these is a source with any kind of scientific or academic credibility. 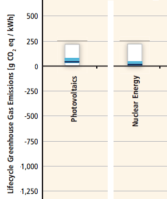 Update: Manfred Lenzen, whose rigorous analysis has been repeatedly and selectively cited by this commentator as demonstrating unacceptably high life-cycle emissions for nuclear energy, has followed up with a clear article summarising his own work. He saw fit to include the IPCC’s own chart for emissions from different technology. I have abbreviated it to highlight the comparison of solar PV and nuclear. Mark Disendorf has called loudly for a huge expansion of solar power, but by his logic it has unacceptably high life-cycle emissions. I find it simpler to support both, myself.

One thought on ““Accidents, waste and weapons!” Are you scared yet?”