We have a greater share of renewable energy every year. 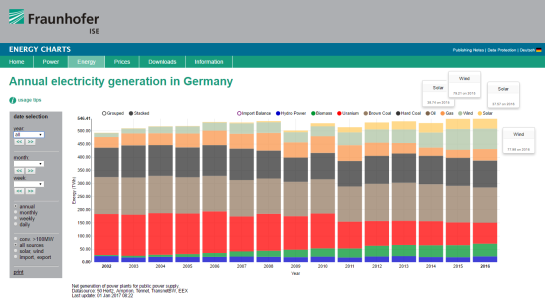 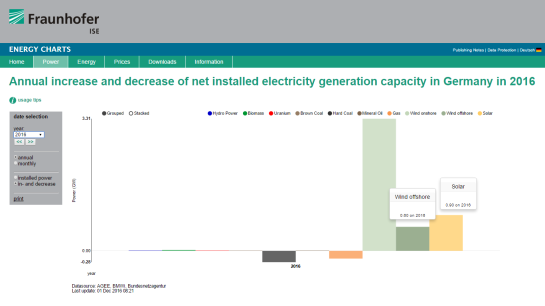 That’s all of the good news. The rest is bad. German solar generated 3% less than in 2015 and build-out has effectively flat-lined. Wind generated 1.5% less, and the cost of the necessary new transmission capacity has increased to €15 billion. Deeper analysis can be found here.

Around 2,800 MW of new lignite-fired power capacity came online in 2012, which benefit from adundant supplies of brown coal in Germany.

But that was three years ago, right? Surely things have improved, right? Wrong.

Germany has inadvertantly demonstrated that there are limits with favoured modern energy sources at industrialised nation-scale, despite overwhelming public and government support. At relatively high but still limited penetration, the addition rate of intermittent renewable capacity dramatically slows and variations in weather can be seen to impact generation share on an annual (not just daily to seasonal) timescale.  Some critics might call this a failure, but it’s actually a supremely valuable lesson for the rest of the world.

And to answer the question at the top: yes, renewable energy share was marginally higher. Whereever you see that claim reported, you will know it was thanks to increased biomass and hydropower output.

I fully reiterate what I wrote a year ago. Germany, where stale anti-nuclear propaganda is taught in schools, needs to start trying to face the idea of restarting its reactors. And the sooner, the better.

A coal barge named Privilege steams up the Rhine

All data is from https://www.energy-charts.de/energy.htm as of 31 December 2016, which may well be subsequently revised or changed, without considering the effects of imports/exports.

6 thoughts on “How Much Longer?”