Watch Indonesia. Its nuclear energy sector is heavily pregnant. Polls show remarkable popularity for the technology. Its regulator, BATAN, has been talking to Japan and Russia about prototype reactors.

What will a nuclear Indonesia mean for Australia? I suspect a broad segment of our country will have great difficulty with the prospect. Further, if we are not at least paralleling their development in the next few years, things could get awkward.

@ActinideAge Is the nuclear road good or bad news for the people and peoples of Indonesia? Films on Nuclear Power. http://t.co/llmjYWqHaK

It was in this framing that an anti-nuclear tweeter quite politely suggested I access a collection of nuclear-critical videos. I politely accepted. And I have to say, the documentary about the fallout from the British weapon tests at Monte Bello Island and Maralinga is fascinating. It really helps with understanding the deep concern about contamination, particularly from radiostrontium.

This is important nuclear history for us. Is it applicable to the potential for safe modern energy production? No. Furthermore, using it to perpetuate fear over knowledge is a fundamental part of the stale narrative who’s time has passed. The peoples of Maralinga have certainly tried to move on Following a link to “helpful nuclear information sites” gives:

and a few other sites which maintain an overarching theme – they do not engage with the professionals in the scientific field that they want rejected.

So, would this film festival screen something that challenges its narrative, like Sundance did?

If not, how is it really different to an anti-vaccination convention, highlighting the faltering steps of early polio immunisation and perpetuating thiomersal fears, and neglecting to invite any conventional  immunologists to present a differing view? 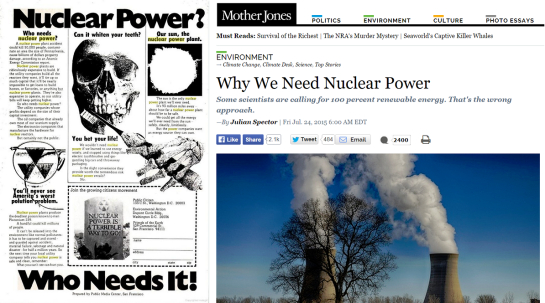